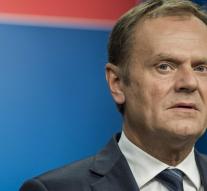 brussels - Good progress is being made in the talks on a new position of Britain in the European Union. But the requirement of the British to reject workers from other EU countries for four years, social services, is politically so sensitive that this requires more consultations at the highest level.

Writes EU Minister Donald Tusk Monday in a letter to the 28 heads of State and Government of the European Union. Tusk mediates a departure of Britain from the EU (Brexit) counter.

The summit of the leaders on 17 and 18 December in Brussels will on this point, " substantial debate " be conducted. In February, should be agreed on everything, writes Tusk. " Uncertainty about the future of Britain in the European Union is a destabilizing factor ".