Home / World / Disneyland says sorry: boys too may be princesses 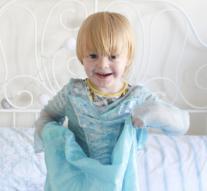 paris - Disneyland Paris has apologized after the 3-year-old British Noah, according to his mother Elsa the biggest fan in the world, was not allowed to participate in a special prinsessendag in the amusement park. An employee of Disneyland was the toddler's mother recently said that there was no place for boys.

Hayley McLean-Glass decided to write an open letter to Disneyland explaining why she wanted to sign up for Princess for a Day. Therein she writes: 'We love Disneyland and were planning to return to the theme park in November. During our last visit, my son Noah was a fan of Elsa, but also of Jasmine, Belle and Cinderella. If something exists like a Frozen Superfan, then Noah is. '

The British mother then explained that she discovered that Disneyland offered a princess event. Perfect to surprise her son, she thought. She sent an e-mail to the park, explaining that Noah is crazy about Disneyprinsessen and would like to sign him up.

However, to her great disappointment she is told that the package is not available for boys. 'At this point, it is not possible to book Princess for a Day for a boy. ', An employee of the amusement park mailed, informing her in the same mail about a special princess surprise package of 300 euros.

After the British newspaper The Guardian asked for a comment park in France, Disneyland went through the dust. 'This attraction is available to all children and we have told the family that we regret that they received inaccurate information. '

Disneyland Paris was not meant to hurt the family. 'We take this high and offer Hayley and Noah our sincere apologies for the uproar. We're going to make sure this does not happen again. '