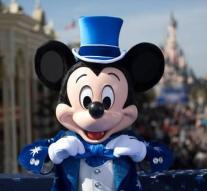 According to CEO Bob Iger, Disney has a good connection with Netflix, but it's time to stand on its own. In addition to all Disney content, everything from Marvel will probably be removed from Netflix. The own video service needs to be aired in the course of 2019. Initially only in the US, but soon afterwards worldwide.

In addition to a streaming disc for Disney material, the company also operates a service around ESPN. Next year, a special on-demand platform should show the lifetime of sports fans including MLB, NHL and MLS matches.