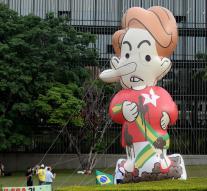 - The president of the Brazilian House of Commons begins an impeachment against President Dilma Rousseff. This is done at the request of the opposition submitted in September, so he has to know Wednesday.

Rousseff, who is in her second term, is certainly not popular among the opposition parties. They accuse her of violating tax laws and handling of public finances to be reelected.

On the impeachment the lower house must still vote. Two-thirds have to really want to come to such a procedure agreement. If that vote is not yet known.