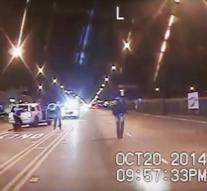 - Five agents in Chicago dismissal hanging over the head because of their role in the death of a black teenager. The seventeen year old Laquan McDonald was struck in 2014 by sixteen bullets from the gun of a white police officer.

Police Chief Eddie Johnson advised the local supervisor to dismiss the five. These include to agent Jason Van Dyke, who fired the fatal shots. The other agents would have made false or misleading statements about the circumstances surrounding the death of the teenager.

The death of McDonald led to mass demonstrations against police violence. People took to the streets after images were released showing how the agent continues to fail after the boy was already on the ground.

Van Dyke is now suspected of murder. He stated earlier threatened to have felt because the boy had a knife.