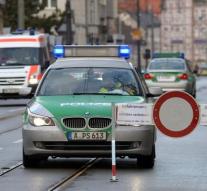 augsburg - Two experts on Sunday after about four hours working bomb from World War II dismantled in Augsburg, Germany. Approximately 54,000 inhabitants of the German town Christmas Day spent elsewhere by because of the dismantling of the British bomb. It was the largest evacuation in Germany since the end of World War II.

Defusing the missile on Sunday was delayed because of the evacuation of the area around the site took longer than expected. To 15. 00 began two experts with the decommissioning. 19. Around 00 they were ready. The bomb had several infections which all had to be removed.

It was a particularly heavy bomb of 1.8 tonnes which was discovered by construction work. During the cleanup was a cleared area with a radius of 1500 meters.