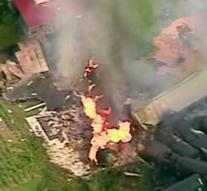 hyndman - In the US state of Pennsylvania, a freight train with wagons filled with hazardous substances was released on Wednesday. In the village of Hyndman, all inhabitants living within a 800m radius were evacuated. There are no known casualties known to date. Pictures of American media show the burning wagons and houses destroyed by the traced train.

The train consisted of five locomotives and 178 wagons, 32 of which were derailed. In part, liquid gas, petroleum and phosphorus were included. The wagons flew on fire after the accident.

The train was on its way from Chicago to Selkrik in New York State. Why did the train at Hyndman derail 160 kilometers from Pittsburgh not yet known.