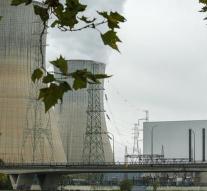 tihange - The conversation that representatives of action groups conducted on Sunday with the management of the Belgian nuclear power plants in Doel and Tihange was 'disappointing'. That said spokesman Peer de Rijk on behalf of the action groups after the talks in Tihange.

Representatives of, among others, the WISE and Greenpeace Action Group, asked the Executive Board to increase transparency and transparency in the harsh reactor vessels in Doel and Tihange. But they were denied them in their own right. However, experts on behalf of the action groups may access the secret research reports, provided that they do not publish anything. Unacceptable, according to De Rijk, Dutch director of WISE and participant in the interview.

In the Netherlands and Germany there is a great deal of concern about the safety of nuclear power plants in Doel and Tihange. In June, for example, a human chain was formed from Aachen via Limburg to Tihange. This involved around 50,000 people. They demanded closure of Tihange 2 and Purpose 3, the so-called cracking reactors.

The Empire does not release reports of the numerous cracks in reactor vessels in Doel and Tihange. 'We must know the reports to conduct the debate,' he said. 'Being secret, suggests that there is more to it. '

There is no follow-up, said De Rijk. 'They refuse openness and hide behind the law. So now politics is on the way. '