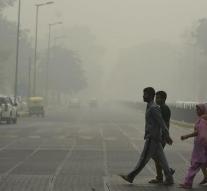 - All schools in the Indian capital New Delhi remain closed the next three days because of air pollution. The board of New Delhi has therefore decided Sunday, according to the BBC.

At present, emissions of particulate matter higher than the limit approximately fifteen times used by the health authorities in India. The inhabitants of the town have been advised only to go out if strictly necessary.

In order to combat air pollution, it is to be carried out in the next five days forbidden construction and demolition in the Indian capital. Also, water is sprayed onto the main roads to wash away the dust layer.

According to the World Health Organization die in India every year approximately 620 000 people from diseases due to air pollution. The biggest polluters in New Delhi are coal plants, car and truck traffic, waste incineration and brickyards. Also fire when cooked and which houses are heated, giving much air pollution.