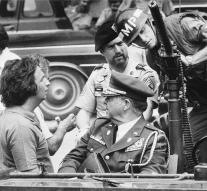 - The American film director Michael Cimino is deceased. That made Thierry Fremaux, director of the Cannes Film Festival, Saturday announced on Twitter. Cimino was 77 years.

He died peacefully, surrounded by his family, Fremaux writes. Details about his death are not known.

Cimino is known from The Deer Hunter. The film about the Vietnam War, with Robert De Niro in the lead role, won five Oscars. Thereof Cimino received two. One for Best Director and Best Picture.