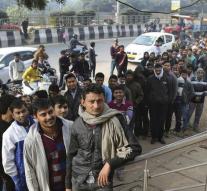 - Foreign diplomats in India may soon likely to skip the long lines at banks. The Ministry of Finance in the country will give the institutions commissioned to officials of embassies priority message The Times of India.

Several diplomatic missions have the newspaper complained to the Indian government. They would have suffered from recent measures against tax evasion and counterfeiting. As stated are banknotes of 500 and 1000 rupees invalid and can only contain a limited amount per week.

One of the consequences of the measures is that people often have to spend hours queuing to exchange their old notes at banks. That fate remains embassy staff probably saved in the future. It is intended that they will soon receive preferential treatment, says the Indian Ministry of Foreign Affairs.

There are still investigating whether the weekly withdrawal limit can be removed for diplomats.