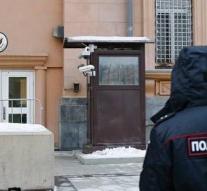 moscow - Russia imposed diplomatic sanctions against the United States on Friday. The number of American diplomats in Russia must decrease to 455, by 1 September, as much as the number of Russian diplomats in the US. Additionally, US diplomats should not be allowed to use a Datjaja complex and a warehouse.

The measures announced by the Ministry of Foreign Affairs are a deserted response to sanctions imposed by the United States in the aftermath of Barack Obama's presidency following Russia's alleged interference in the US elections. Moscow did not respond immediately, not to raise obstacles to Obama's successor Donald Trump. However, it has so far failed to reverse the American sanctions. In addition, the US Senate decided to introduce new sanctions against Russia.

With the measures, Moscow puts Trump in front of the block: the US president must now follow a hard line with Russia, or veto the Senate's step and push its own Republican Party.