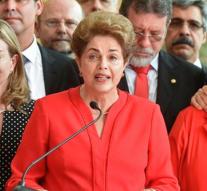 - The deposition of Brazilian President Dilma Rousseff, appears to cause a diplomatic row in South America. Both Venezuela, Ecuador and Bolivia have recalled their ambassadors from Brazil.

Rousseff was Wednesday by the Senate turned away because they would have tampered with budget figures in 2014. She asked that rosy for to increase its chances of re-election, held the upper house. Of the 81 senators, 61 voted for and 20 against deposition. Conservative Vice President Michel Temer was sworn in as her successor.

Nicolás Maduro, president of Venezuela, argues that the United States is behind the impeachment.,, This not only is a coup against Dilma, but also from Latin America and the Caribbean, '' he says.


Michel Temer, the new president of Brazil, right after his appointment,, announced a new era '' for the largest Latin American economy. He wants to look for investors. Immediately after the ceremony he got on the plane to China, where he will participate this weekend at the G20 meeting.