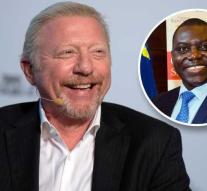 bangui/frankfurt - While the government of the Central African Republic (CAR) denies it, former tennis player Boris Becker maintains that he has a diplomatic passport of that country and thus enjoys diplomatic immunity. The 50-year-old German is in London in a lawsuit about his bankruptcy.

On Monday he came unexpectedly with the announcement that he has a diplomatic passport from CAR. The foreign minister of the country pointed that Tuesday to the land of fables.

According to him, Becker received a 'clunky false' diplomatic passport and it is not the signature of the minister who was put in there. Based on the number, he concludes that the pass belonged to a party that was stolen in 2014. The country will investigate who delivered the false travel document to Becker.

Becker left Tuesday in German media, however, note that he certainly enjoys diplomatic immunity. 'It is a reality, a fact that I am a Central African Republic diplomat,' Becker told Top Magazin Frankfurt.