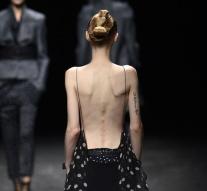 - Modehuizen LVMH and Kering, the names behind Christian Dior, Gucci, Givenchy, Yves Saint Laurent and Marc Jacobs, have said that they stop deploying low-grade models on the catwalk.

These are the two largest fashion houses in the world. They bow to global criticism that the industry is raising eating disorders.

They banned (French) size 32 for women and size 42 for men. Also, no girls under the age of 16 will be used for the adult collection.

In May, the Danish model Ulrikke Hoyer complained about LVMH's Louis Vuitton. According to Hoyer, she was asked to starve herself for a show. The company denied.