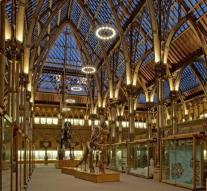 oxford - The Natural History Museum of the University of Oxford was thrilled about the restoration of the 19th-century glass roof, so it had become much lighter everywhere. But now that the light penetrating a withering heat and harmful UV rays of the building. The skeleton of a dinosaur, and all kinds of stuffed animals for example, do not seem to heat and radiation resistant.

The museum is in a hurry to make a heat-resistant layer on the glass, it now appears that the temperature at sun rises easily to 44 degrees. There was converted just 2.3 million counted down for the restoration of the glass roof from 1860. The museum has no choice because in addition to the depletion of the precious collection, it has to do with complaints from visitors about the heat.

The film layer which is now being applied to the glass, but repels the harmful UV radiation but not the heat and thus a new and costly air-conditioning system should also be installed.