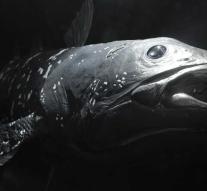 cape town - A bizarre fish species that is older than the dinosaurs threatens to die out.

Through test drilling for oil off the coast of South Africa, the last area where the Coelacanth, the 'living fossil', is about to disappear.

The blue fish was only discovered in 1938. Until then paleontologists thought that the Coelacanth had died extinct tens of millions of years ago. The fish probably swam around 400 million years ago.

Coelacanths are the close relatives of the lung fish, writes the Museon. Long-eared fish landed 350 million years ago, and all vertebrate terrestrial animals such as amphibians, reptiles, birds, mammals and also humans are descended from them.

Very small populations of Coelacanth are still living on the eastern side of Africa and Indonesia. In Sulawesi the fish was known as 'the king of the sea'.

In 2000 a new group was discovered in the east of South Africa. An Italian company wants to drill for oil at that location.

A small oil leak can mean the end of this group of 'dino' fish.