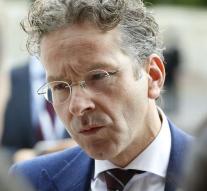 That has unanimously decided the EU Finance Ministers of the euro area countries in Luxembourg. Dijsselbloem can finish his mandate despite the fact that he is no longer a minister.

Dijsselbloem made the decision itself after the euro group ended Monday in Luxembourg. His work and performance has often been praised by the other European ministers. 'We have a very good chairman,' said Frenchman Bruno Le Maire. 'Jeroen would like to stay and I think it's the best option now.'

The Deputy Minister was elected by its euro group colleagues on 21 January 2013, despite being in office for only two months. On July 13, 2015 he was re-elected. As chairman of the euro group, he is also automatically chairman of the board of directors of the European Support Fund ESM.