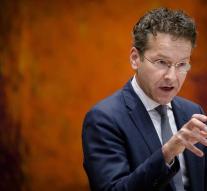 london - British Foreign Minister Boris Johnson is lying to the people about the opportunities that exist after the Brexit ahead of Great Britain in the European context. That said Jeroen Dijsselbloem, President of the Eurogroup, the BBC program Newsnight.

'Johnson holds the British people opportunities that are not actually available,' Dijsselbloem suggested Tuesday. He cited an example in which Johnson says that Britain can maintain full access to the European market and at the same time can keep the customs union. 'That's just impossible, no such thing. '

Dijsselbloem explained in the British television program that the other way is possible. So be part of the European Customs Union but not of the internal market. Turkey is an example. 'Johnson says things that are not politically feasible. He gives the British a fair idea of ​​what he can achieve with the negotiations. '