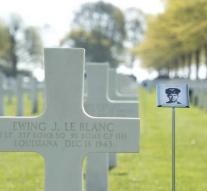 groesbeek - Every year, veterans from many countries come to the commemorations of the liberation of the Netherlands. This weekend, at the 73rd anniversary of the Market Garden operation, they launched the launch of the Allied countries slogans against Germany in September 1944. 'But in no time is it up. Those people are now very elderly, some even in the hundred years. The very last one who fought in the Netherlands in 1944/1945, 'says Alice van Bekkum of the Faces to Graves Foundation.

The Groesbeek Faces to Graves is part of the CanadianWarGraves platform. nl. This platform, but also Arnhem Roll of Honor and Faces of Margraten in South Limburg has been working on collecting photographs and life stories of the nearly 20,000 allied soldiers who fell in the Netherlands during World War II for several years. Van Bekkum: 'So that the endless rows of white crosses and stones on the military legacy will live in our country. As the generations after us, who are still further from World War II, continue to realize that real people have given their lives to our freedom. ''

The organizations together have thousands of photos, data and stories from Britons, Americans, Canadians, Poland, French, and soldiers from other countries, helping to liberate the Netherlands at the time. Their great wish is that the story as far as possible can be found at the 75th anniversary of Operation Market Garden in 2019 online. 'Like a tribute, a digital monument,' such as Margraten's Faces.

But there is still a lot to do. The collections are already extensive, but still not complete. Volunteers make travel to clubs of war veterans in their homelands. During commemorations, foreign guests are addressed. On the legacy, foreign visitors are asked if they recognize names from their surroundings. 'There are also mountain information on the shelves. We talk to younger volunteers who are useful in ICT so we can digitize everything,' said Van Bekkum.

The ceremonies around Market Garden commence on Friday in Arnhem with a memorial and the multimedia presentation Bridge to Liberation Experience on and around the John Frost Bridge, the bridge that could not be conquered in 1944. In the area between Eindhoven and Arnhem all weekend memorials and events are held.