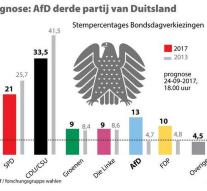 berlin - The current government coalition in Germany has suffered a bitter defeat on Sunday, according to the exit polls. Christian Democrat CDU of Chancellor Angela Merkel lost sharply and came down with about 33 percent of the worst result since 1949. The Social Democratic SPD has not previously scored so low in elections to the German Lower House and received around 20 percent of the electorate, according to the exit polls.

SPD leader Martin Schulz responded immediately by saying that his party should be in opposition. If the Social Democrats do that, Merkel has little choice for a government coalition. She must then bring together two sides in a three-party coalition, strongly opposed parties, the Greenland environmental group and the entrepreneurial party FDP.

According to the Sunday polls, Merkel should talk with Christian Lindner of the FDP (Freedom Democratic Party) and Green Leaders Katrin Göring-Eckhardt and Cem Özdemir.

The Bundesdag will later count to 630 members. The Christian Democrats (CDU / CSU) would hold 220 seats, the FDP probably receives 69 and the Greens 61. Other government coalitions are not realistic without the 137 seats of the SPD.

The coalition CDU-FDP-Groenen is called the Jamaica coalition because the colors of the three parties- black, yellow and green- are in the trio of the Jamaican flag.