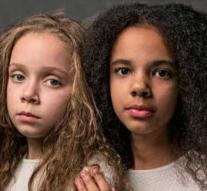 - A striking cover photo coming month on the cover of National Geographic: the twins Marcia and Millie Biggs from the British Birmingham. Both girls have the same father and mother and were born on the same day. Marcia is white, Millie has a dark skin color.

Their father, Michael Biggs, now tells the remarkable life story of his two 11-year-old daughters to National Geographic. Marcia and Millie are two-person twins, who seemed identical at birth. But as soon as the girls were ten months old, their parents began to notice some striking differences between their daughters.

The skin color of the little Millie started getting darker and darker, while Marcia barely changed. Now, eleven years later, the girls have a completely different skin color.

At first glance, you would not think they were sisters. Marcia resembles her British mum Amanda Wanklin with her blonde long hair and her blue eyes. Millie is more like her father Michael Biggs, who gave her brown hair and a tinted skin color with his Jamaican roots.