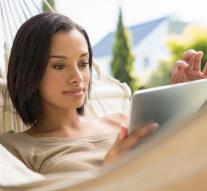 the hague - Despite a significant increase in the number of smartphones and tablets, changed the average time Dutch thirteen and older to media pay out between 2013 and 2015. The way Dutch watch, listen, read and communicate changed over the last two years though. This is evident from study published Tuesday by the Social and Cultural Planning Office (SCP).

Last year Dutch spent daily by more than a quarter of the day (eight hours and 33 minutes) of media. Watching television remains popular. On average, there are daily two hours and 24 minutes watched. Especially people over 65 like to watch television. On a typical day looks 90 per cent to the tube. Among the thirteen and nineteen year olds, this is 49 percent. In 2013 looked even 67 percent of teenagers watching television at the time of broadcast. The number of teenagers watching streamed, downloaded or purchased videos on a day doubled from 9 to 18 percent.

Radio is losing ground among young people. More than a quarter of teenagers listening daily two and a quarter hours. Dutch average is more than half.

Of all age groups teenagers communicate most via media: daily average of two hours and twelve minutes. The group of twenty to 34 year olds communicates more than other age groups. A large part makes daily use of social media. Both groups are also sent Champion messages via SMS, chat and WhatsApp. People aged 65 and older opt mostly for traditional phone, while 35 to 64 year olds email above.

The SCP study the researchers looked at all media activities. They examined the traditional mass media (TV, radio and print media) and the use of mobile devices, computer, internet and gaming. Here the diary data were analyzed from nearly 3,000 Dutch.