Home / World / Diesel and gasoline in the ban in England 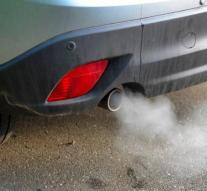 london - Britain wants to ban the sale of diesel and gasoline cars from 2040. The government will announce this Wednesday, according to British newspapers. Britain thus follows the footsteps of France and Norway. In these countries, hybrid or electric cars are only allowed in the future.

In France, a premium has been chosen for people who hand in an old car. Here too, the ban goes into 2040, in Norway it is already in 2025.