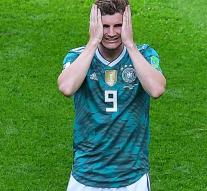 munich - 'Oh nein!' Sounds baffled after the German elimination. 'Die Mannschaft ist raus!' Says the commentator full of horror. All those present in the beer cellar Franziskaner in Munich collectively put their hands in the face.

The whole of Germany is crying. After the echec against the insignificant South Korea, which with moderate footballers at 0-2 win against the current world champion came, our eastern neighbors are empty-handed in Russia. 'Fully deserved', is the unanimous opinion about the border, after it was already lost against the Mexicans.

'If you play Scheiße in this way, we do not need to go any further into Russia', thinks the 30-year-old Jakob, who developed BMWs in the Bavarian capital, while taking a sip of his half liter of lager. 'It surprised me that the referee did not want to give the Korean goal in the first instance. Everyone saw that it was not offside. Maybe somebody who did this would also have promised a German BMW. '

'In any case, Gary Lineker's saying no longer applies. That football is a match between 22 men and the Germans after ninety minutes and a little extra time to win, 'says Alex waiter, resting on the beer bank. The 35-year-old waiter believes that the German beer sales will drop considerably in the coming weeks.

'I am not going to cry or mourn here', says his blonde neighbor Corinna hard, while eating a greasy Schweinshaxe. 'This is exemplary for the state of Germany. Hopefully Chancellor Merkel will not be able to escape the migration crisis these days either. I am a big fan of her ', says 32-year-old pedagogy student.

'The only bright spot was the light-footed dribbling of wing spike Marco Reus. I am one of BVB Dortmund, you understand that, 'says Corinna. 'But that bad body language of Mesut Özil, I can not do anything with that. Anyway, Ozil could play better for Turkey, he also gave his friend, President Erdogan, a tricot. 'This controversial gesture caused a lot of division in Germany.

Then Alex brings himself back in the conversation: 'Listen Dutchman. We are still Weltmeister. And where were you by the way at this world championship? Especially relaxing on the couch, 'he says with a grin smile.

'Those fed up stars, all those self-satisfied millionaires', it sounds disfiguring to the people in the Bavarian beer house Franziskaner, where the audience can continue the game on various screens.

Finally, long in the extra time, the tall goalkeeper Manuel Neuer rushes forward for an attack, the Bavarian public suspects that he is coming home from a cold shower. And yes, when a Korean strikes the ball forward and their striker throws the leather into the empty German goal, everyone knows: 'Das Spiel ist aus!'

Karim Tayeb (57) from Berlin suspects a conspiracy. He is visiting the expensive Maximilianstraße, where the Porsches of rich Arab men and their veiled women stand. 'The stuck out card. In Putin's Russia, Germany was not allowed to become world champion again. It surprised me that the referee had nine minutes played. A scandal! '

As a consolation, a Bavarian brass band played a sad melody in Janker and Lederhose. 'Auf Wiedersehen!' Finally calls the waiter.