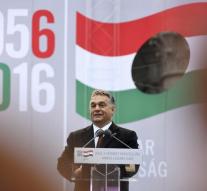 budapest - The Hungarian Prime Minister Victor Orbán's Sunday booed during the anniversary of the popular uprising of 1956. Hundreds of supporters of the liberal opposition felt that way show their dislike of his policies.

The official ceremony was held in front of the parliament building in Budapest. There had gathered more followers of the right-wing nationalist government leader Orbán than opponents, yet they were regularly from the edge of drowned out the plan. Alternating was ' dictator, dictator '' shouted blown bosun shrill whistles. The protest concert was intended for the Polish president and guest of honor Andrzej Duda.

Orban defended in his speech among other things its hard stance towards refugees and denounced the EU. ' Instead of their own children choose which migrants and instead focusing on employment, she draws a bill on the future ''.

On October 23, 1956, the Hungarian people revolted against the communist rule. Soviet troops broke the resistance two weeks later in a bloody manner. Many Hungarians fled to, inter alia Netherlands.