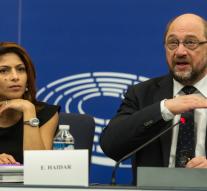 strasbourg - The European Union should not sever ties with Saudi Arabia because of the human rights situation in the country. The dialogue with the country should be increased. That said the President of the European Parliament, Martin Schulz during a press conference Wednesday. Schulz had just before the Sakharov Human Rights Prize 2015 was awarded to the wife of the Saudi blogger, writer and activist Raif Badawi, Ensaf Haidar.

" If we do not talk to Saudi Arabia, we can not change things, " Schulz said. " We have to keep the dialogue open and stepping up. "

The 31-year-old Badawi is the founder of the site Free Saudi Liberals when discussions are held about politics and religion. He was arrested in 2012 for insulting Islam and subsequently sentenced to a long prison sentence and a thousand lashes.

The prize for freedom of thought is linked to 50,000 euros.