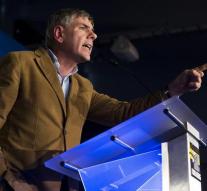 antwerp - The Board of Vlaams Belang MEP Filip DeWinter officially reprimanded, because last week gave a speech at the extreme right-wing Greek party Golden Dawn. Winter and two other MPs, Jan and Frank Penris Creyelman, no political contacts abroad may no longer maintained mandate of the President or of the party executive.

Furthermore, the Vlaams Belang Anke Van dermeersch as a member of the party executive put aside. She was traveling with three MPs reprimanded last week to Greece. According to him, the delegation wanted to see the refugee crisis firsthand. Photos and messages on social media was to see that the politicians of the Vlaams Belang had a meeting with members of Golden Dawn and DeWinter made a speech at a meeting of the party.

' With such a visit can only shoot in your own foot, '' said president Tom Van Greeks of the Vlaams Belang. Golden Dawn is very controversial. The party is since 2012 in Parliament and used symbols reminiscent of swastikas.

DeWinter is disappointed by the sentence which his party has imposed on him. ' I am not asked any time to be heard, '' DeWinter told VRT News. ' This is all done behind the scenes without the parties concerned to defend or justify. Apparently they prefer listening to some left-wing journalists who put this all in the scene than to their own party members. ''