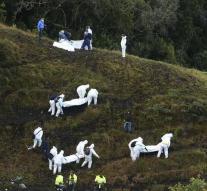 - The pilot of the downed unit with Brazliaanse Chapeco Armenian football team on board shortly before the crash requested an emergency landing at the airport traffic of Rio Negro. Because another plane at that moment was in trouble, the flight footballers did not get priority to land.

That report Colombian media based on a statement from another pilot who could follow the communication between the pilot and the control tower. The pilot who was listening flew at that point in a unit of society Aviaca.

According to the pilot wanted the unit of Lamia make an emergency landing because of an impending lack of fuel. The traffic would have not given permission for it and gave priority to one in distress gear VivaColombia. A few minutes after the conversation reported the pilot of the disaster unit 'total power' and crashed in a mountainous area near Medellin.