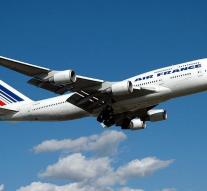 - (Reuters) - An Air France plane from San Francisco, after an anonymous threatening phone Tuesday made ​​a precautionary landing in the Canadian city of Montreal.

Flight AF083 was en route to Charles de Gaulle airport in Paris, where he was scheduled to arrive Tuesday afternoon.It is according to the French newspaper Le Figaro still unclear exactly what the threat is. The aircraft, with an unknown number of passengers on board, landed safely in Montreal. Aircraft, luggage and passengers are checked by Canadian airport authorities.