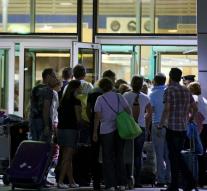 london - A plane carrying vacationers stranded in the Egyptian resort of Sharm al- Sheikh is Friday landed in England, it was known at Gatwick Airport near London. It is the first flight of a series that was panned to remove some 20,000 British tourists home.

The intention was that there would be Friday nearly thirty flights from Sharm al- Sheikh to Britain, but the operation was called off. A number of aircraft en route to Sharm al- Sheikh on Friday-turn made ​​. The Egyptian authorities have stated that the airport at the southern coast of the Sinai Peninsula can not handle the crowds.