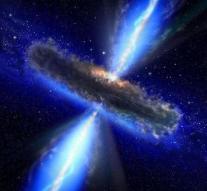 - The discovery of the century, it was proof that Albert Einstein was right and that gravitational waves really exist. The two detectors in the United States discovered the mysterious phenomenon, spruced up in recent months. Since Wednesday, they run again, looking for more answers to the riddles of the universe.

Gravitational waves are ripples in spacetime known as the backbone of the universe. They are caused by violent events, such as the merging of black holes. Swinging shock waves through space.

That discovery happened about a year ago, when testing after a previous facelift. After that there is further tinkered and refined. The detectors have improved and devices can run longer, so scientists expect to find more.

Physicists from Amsterdam and from Nijmegen astronomers are closely involved in groundbreaking research.