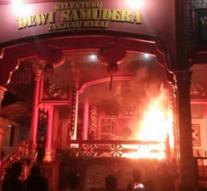 jakarta - In the north of the Indonesian island of Sumatra seven people arrested on suspicion of committing attacks on Buddhist temples.

According to a spokeswoman for the police made the seven part of a gang that have caused destruction at least three temples and other property in the town of Tanjung Balai. There were no injuries.

Indonesia, where the majority of the population adheres to a moderate form of Islam, suffers sporadic attacks on religious minorities by Islamic hardliners. Last year, hundreds of members of security forces were still deployed when a Muslim mob had put a number of churches on fire.


Indonesia has a sizable ethnic Chinese minority, many of whom are Buddhist. The country also has a history of anti-Chinese violence. The latest in the nineties during the political and economic crisis that initiated the fall of the authoritarian leader Suharto. But police denied that the attacks were aimed at temples against the Chinese community.