Home / World / Desmond Tutu stops as an ambassador for Oxfam 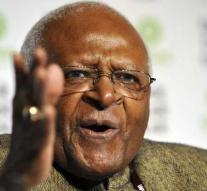 johannesburg - The retired archbishop Desmond Tutu stops as an ambassador for Oxfam. The 86-year-old South African clergyman decided to do so because the British aid organization got involved in a sex scandal. Employees of Oxfam hired young prostitutes in Haiti after the devastating earthquake of 2010.

'The archbishop is deeply disappointed by the accusations about immoral and possibly criminal behavior of aid workers,' according to a statement from his office. Tutu believes that only idealists belong to a charitable organization. That is why he thinks it is also interesting that the good work of many thousands of people by this affair loses its luster.