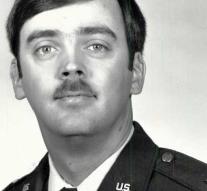 sacramento - A missing American air force officer was found after 35 years under a false name in California, reports American media. William Howard Hughes had access to state secrets and disappeared in 1983 when he had to leave for the Netherlands for work with NATO.

Media reported at the time that the officer was probably imprisoned by the Soviet Union, or voluntarily defected. The US Air Force reports that the man was last seen after taking in $ 28.500 at nineteen different locations. A long and intensive investigation, in which friends and family of the missing officer were questioned, yielded nothing. After a few months the man was labeled a deserter.

The man was caught during a passport fraud investigation. The data on his false passport turned out to be wrong. 'Barry O'Beirne' finally gave in to the disappeared William Howard Hughes.

The officer said he had become depressed by his work within the air force.