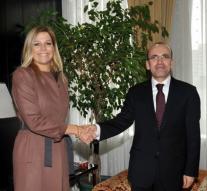 chengdu - Turkey will continue to uphold the rule of law and democratic principles. That said the Turkish Deputy Prime Minister Mehmet Simsek Saturday during a G20 summit in the southwestern Chinese city of Chengdu.

He was referring to the strict government action after the failed coup last Friday.,, First let me say that despite what happened last week in Turkey, we continue to speak up for democratic principles and the rule of law, and that is actually not much changed. Though I know that here are put question, 'Simsek told an audience of finance ministers and central bankers from the G20 countries.

Since the failed coup on Friday, tens of thousands of public servants have been dismissed or suspended. The fierce reaction of the Turkish government in the coup attempt has deterred investors who then dumped the lira and selling shares.