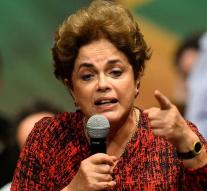 - The Brazilian Congress Thursday takes the next step in the impeachment of President Dilma Rousseff. After the parliamentarians had earlier this month with more than two-thirds majority decided to mark its formally suspect, they decide in the coming weeks whether Rousseff must step down.

Rousseff is accused that she spent money without the consent of Congress and they ended unauthorized loans at state banks to present favorable budget just before the elections in 2014. She is not accused of self-enrichment.

The president strongly opposes the allegations, which in her eyes is a cover for a coup by right.


Since the beginning of the procedure for Rousseff observed by its former Vice President Michel Temer. If Rousseff is deposited, it is formally president until the end of the period in 2018.