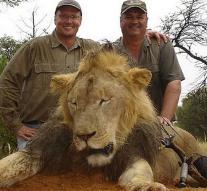 harare - Walter Palmer, the American dentist in July in the Zimbabwean Hwangepark the very popular lion Cecil shot dead, will not be prosecuted.

Zimbabwe has announced to waive extradition by the United States. The required hunting papers of Palmer are in order, as stated Minister Muchinguri-Kashiri Environment Monday it.

The death of the lion caused worldwide outrage. Palmer went into hiding because of the fury with which he was attacked. Last month, he popped up and went back to work.

The dentist had expressed regret but at the same time always maintained that his hunting party was legal. He is the minister again welcome in Zimbabwe, albeit as ordinary tourists and not as a hunter.