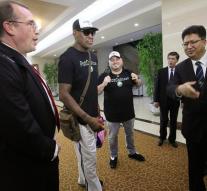 pyongyang - Former basketball player Dennis Rodman is back in North Korea for a visit to dictator Kim Jong-un, with whom he has been friends for several years.

'I'm just trying to open the door,' he told reporters at Beijing airport. Rodman travels to the country with the knowledge of the US government, but does it as a private person.

'We wish him the best, but we warn Americans not to travel to North Korea for their own safety,' said Deputy Minister of Foreign Affairs Thomas Shannon. Rodman says his main goal is to bring sport to North Korea.

The tensions between the United States and North Korea have been a long way through rockettings of the Stalinist country and hard words of US President Trump.

'I'm pretty sure Trump is happy with the fact that I'm here to bring about what we both need,' said Rodman.

During Rodman's first visit to Kim Jong-un in 2013, Trump called the eccentric old basketball player 'smart'. 'You look at the world that explodes around us,' Trump said in an interview with Fox News, 'Maybe Dennis is a lot better than what we have. '

Trump also knows Rodman from his reality show The Celebrity Apprentice. Rodman was a candidate in the program in 2013. Later it was suggested that the two would travel to North Korea, but this was denied by Trump.

The trip of Rodman is sponsored by a company that offers a digital means of payment for the legal weed industry. An earlier trip was paid by a betting office.