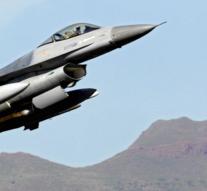 copenhagen - Denmark gets its F-16s in mid-December as planned return from the Middle East. The seven sets have half a year long US-led attacks on targets of the terrorist group Islamic State in Syria and Iraq, but after evaluation it was decided that not renewing the mandate.

Instead, Denmark will support the Iraqi army with training and analysts, as well as construction and engineering team, the Danish ministers were Foreign Affairs and Defence on Friday. They will include exercise Iraqi soldiers in demining.

Danish F-16s were, according to a US study on September 17 involved in an attack that linked fighters were bombarded with the Syrian government, rather than IS units as intended. According to the study, this was by ' unintentional human error ''. About this research scurried Danish ministers not a word.