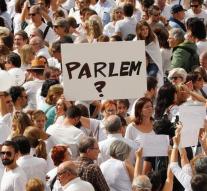 madrid - Tens of thousands of Spaniards have demonstrated in various cities on Saturday for a concert about Catalonia. Under the motto 'We talk?' They came together for the towns of, among others, the Spanish capital Madrid and Barcelona, ​​the capital of the Catalonia region that wants to set apart from Spain.

Most activists were dressed in white and wore white ribbons and balloons. The protesters called Spanish Prime Minister Mariano Rajoy and Catalan government leader Carles Puigdemont to talk to each other.