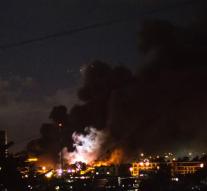 - Protesters in Gabon on Wednesday set fire to the parliament building after the government had announced the re-election of President Ali Bongo. The outcome is far from undisputed. Bongo's opponents claimed last weekend though victory.

,, The demonstrators went in the back and set fire to the National Assembly, 'said one eyewitness, who wished to remain anonymous for fear of reprisals. The fire brigade arrived quickly and try to extinguish the fire.

According to the Ministry of Interior Ali Bongo received 49.8 percent of the vote and continued his opponent Jean Ping stabbing at 48.23 percent. The opposition rejected the outcome even before it was announced.,, We say to the people of Gabon that they should not let this victory be stolen, 'said a member of the election commission who is also a member of Pings party.,, Ali Bongo own this country do not. '


The Bongo family makes almost half a century of service in Gabon.