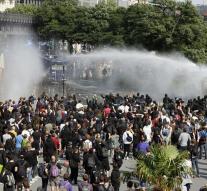 hamburg - Eleven protesters became heavily wounded in Hamburg on Friday morning when a fence on a wall where they clung in gave birth. The protesters made a fall of about four meters, says the fire department.

The wall was around a company where the activists wanted to go in. Together, thirteen activists were brought to hospital. Many of them had wounds at their head. The emergency services broke out with twelve firefighters, five emergency vehicles from doctors and two firefighters.