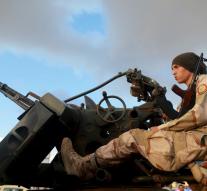 - At least nine people in Libya were killed when mortar shells ended up in demonstrating crowds. About twenty people were injured according to medical sources.

More than two thousand people were in the city of Benghazi took to the streets to make the protest a proposal to form a national unity government. The United Nations has drawn up a plan.

Libya in chaos since dictator Muammar Gaddafi was ousted. Thus, only in Benghazi several rival factions active. Some neighborhoods are laid by fighting in ruins, while in other places in the city very much at all brands of battle.