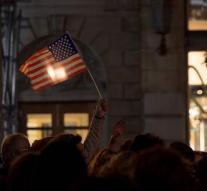 - Several thousand people have sat in New York for the entrance to the Trump Tower demonstrated against the election of Republican Donald Trump to new US president. The police had afternoon no one arrested around 13:00 pm (local time).

The CNN hurried a protest march, but it was not clear where the protesters would move. Trump Tower is on the famous Fifth Avenue, on the corner of 56th Street in Manhattan.