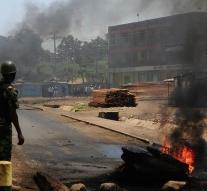 nairobi - Kenyan police officials have killed 12 people earlier this month during the riots of President Uhuru Kenyatta's election victory. At least one hundred people were seriously injured by police violence, according to Human Rights Watch (HRW), based on their own research.

Agents, according to Kenians, would also have guilty of robbery of homes where search was made. 'Police officers broke open doors, beating residents and stole money, phones and televisions,' the human rights organization stated the actions of the police in the city of Kisumu.

The organization accuses the Kenyan police of guilty of excessive violence in opposition teams. One of the dead is reportedly a six month old baby. HRW calls on the Kenyan authorities to prosecute agents who went outside their booklet.