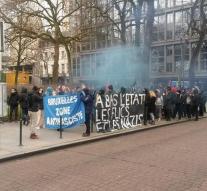 brussels - A demonstration of about a hundred anti-fascist protesters has left its mark in Brussels. Bus shelters have been destroyed and some of the demonstrators have pelted the police with stones and other projectiles. That report Belgian media.

The demonstration started at the Meeûssquare in Brussels and was directed against the far-right Alliance for Peace and Freedom (APF), which this weekend is holding a conference in the Belgian city.

A hundred opponents of this group held a demonstration which would not be applied for and not approved by the police.

'I am worried because I see signs everywhere in our society of the recurring fascism, a return of the extreme right ideology,' said one of the protesters against the Standard.

The demonstrators went with banners through the city, according ran out of control, according to the Brussels police. 'The demonstrators gathered loose projectiles such as cobblestones, mainly from a yard nearby and brought destruction,' says a spokeswoman.