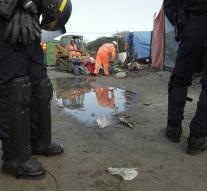 - Construction workers on Tuesday began dismantling the makeshift refugee camp in Calais. They used sledgehammers to demolish the abandoned shelters in the so-called Jungle.

The police were armed with water cannons a watchful eye while hundreds of migrants were waiting for buses. They are transferred to reception centers elsewhere in France. According to officials, the operation proceeds peacefully.

The government sent Tuesday morning social workers and translators pamphlets in the camp. Those residents were persuaded to prepare for departure from the Jungle.

Some migrants have months or even years spent in the camp. Yet many seem to abide by the demolition of their former residence. 'We know that the past is the Jungle', approved a 21-year-old Afghan who was on his way to the hangar where migrants are registered.

The refugees who go to official shelters, mainly from Afghanistan, Sudan, Ethiopia and Eritrea. They all wanted to Britain. That country still takes only children without attendants. Who now reside in a separate shed.