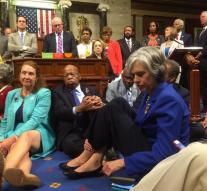 - Democrats in the US House of Representatives have Thursday after more than 25 hours ended their zitprotest. The action was intended to force a vote on stricter gun laws. A concrete result was not achieved.

Democratic Congressman John Lewis called his comrades on from July 5, after the recess, even more determined to return and fight for stricter gun laws. Until that time for tougher laws to acquire them support in their constituency for the sale and possession of firearms, according to Lewis. Republicans called the protest a political stunt and a transparent attempt by the Democrats to fill their campaign funds.

The debate about tightening gun laws erupted earlier this month unscrewed after the massacre in gay club Pulse in Florida, where 49 people were killed. Democrats running in their campaign for new legislation in Congress against a wall of Republicans, who consider most proposals for stricter gun laws as a violation of the fundamental right to bear arms.