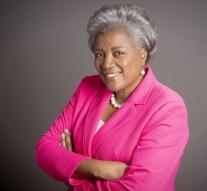 washington - The cyber attacks have continued up to the presidential elections in the Democratic Party. That party chairman Donna Brazile told ABC News.

President Barack Obama said himself a Democrat, had Friday that he Russian President Vladimir Putin had directly addressed in September to hacking. After that conversation, the attacks were immediately over, says Obama. Brazile says she is disappointed that statement: ' No, they stopped then. They came every single day for us, until the end of the election campaign. They repeatedly tried to hack our systems. We have put the best security, but they attacked constantly. ''

Brazile said that the party was warned in May by the FBI and intelligence agencies.